A Finnish modelling study of salt content in bread has produced interesting results. After examining the link between salt consumption and health in 25 to 74-year-old Finnish adults, the study estimated that a reduction in bread’s salt content from 1.2% to 1.1% would give 460 fewer cases of arterial disease over the next decade. A further reduction to 0.83% would reduce the number of cases by 1,700 – without any other dietary or lifestyle changes.

That’s valuable knowledge in Finland, where the risk of cardiovascular disease is high.

In countries where bread is part of the daily staple diet, it’s no surprise that bread is a significant source of the salt we consume. But, the fact is, average salt consumption is too high all over the world, with negative implications for health in general. Only regions like Oceania and Sub-Saharan Africa come even close to the World Health Organisation’s salt intake recommendation of maximum 5g a day.

National guidelines for salt consumption are often slightly less severe. Many European countries have set a daily consumption target of 6g. Others have a lower target – well aware that a gradual, stepwise reduction is easier for consumers to accept and for food manufacturers to achieve. Because cutting back on salt is quite a challenge.

It’s not just the fact that salt is a fantastic flavour enhancer. It also contributes to food structure and is an age-old preservative that hinders the growth of pathogens and spoilage organisms. In bread, it adds strength to the dough, regulates yeast activity and helps slow the staling process. That makes salt reduction an exercise in innovation.

Today, most of the salt we eat comes from the foods we buy rather than from the food we make ourselves at home. In Finland and the UK, for example, bread contributes around 18% of the salt in everyday consumer diets. In Norway, bread accounts for 22% of dietary salt and, in Sweden, 11%.

That means food manufacturers, restaurants and caterers, and the artisanal baker on the street corner all have a responsibility to help consumers reduce their salt intake to a healthy level. On this point, it seems that bakery companies are making a difference.

The UK’s Consensus Action on Salt and Health, for example, has conducted a survey which shows that the bread and rolls category is currently the only food group expected to meet the UK government’s salt reduction targets for 2017. In other words, the salt content of bread and rolls will be no higher than 1.13g per 100g by the end of this year.

Lantmännen’s Vaasan group, which produces much of the bread consumed in Finland, has also set a 10% salt reduction target for its fresh bread products by 2018. As Finland is one of the countries that follows the WHO 5g recommendation for daily salt intake, this is a path that all food manufacturers in the country are likely to follow.

UK surveys have looked back at the 20% reduction in the salt content of bread between 2003 and 2011*. Like the recent modelling study in Finland, they have found a correlated reduction in blood pressure and deaths due to heart disease and stroke over the same period. In other words, there’s every reason to keep on going – until the salt content is just enough to give bread the right structure and texture with the smallest possible risk to consumer health.

Salt intake around the world 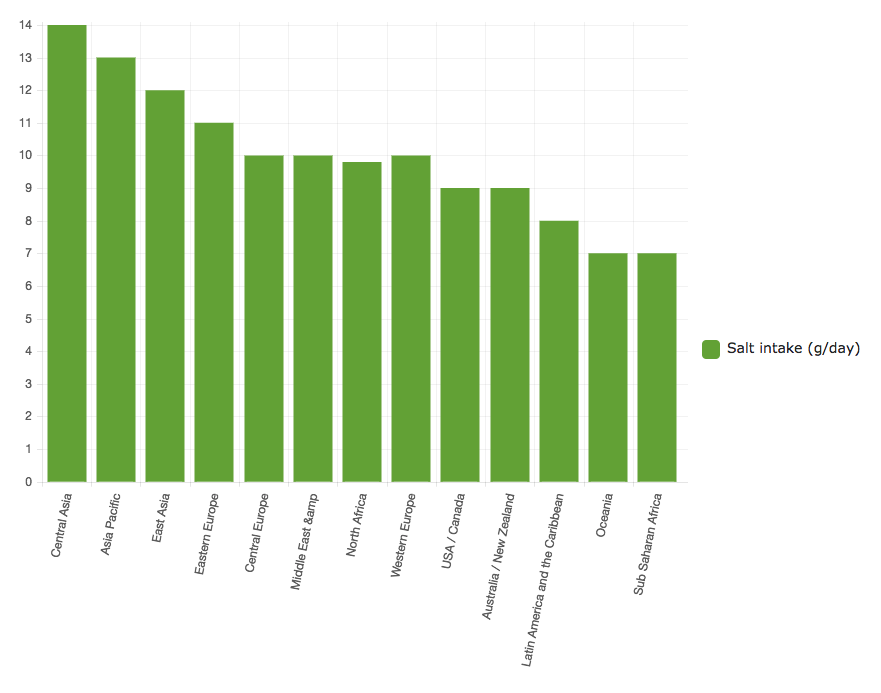 If you’re interested in learning more about salt reduction in bread, feel free to contact me at marika.lyly@lantmannen.com

Why younger consumers want honest ingredients – and how to target them

Oats make so much more than a good porridge

Why rye is a cause for healthy celebration