Pairing guide: How to make the perfect mix in a sandwich

Bread and cheese are made for each other. But when it comes to making the best sandwich in the world – who else are partners in crime? And what should you think about when mixing and matching bread with taste and texture?
January 31, 2019

As a general rule, you should use bread with mild flavour to let the sandwich fillings stand out on their own – or a bread that has flavours which complement the fillings. Good bread can elevate the ingredients, and in the following we will go over why certain sandwiches are seen encased with specific types of bread and how you choose the right filling.

The classical sandwich bread is characterized by refined flours, soft texture and light brown crust. It is chosen for its neutrality, making sure not to outshine the filling in flavor.

Soft white bread is perfect for more tender fillings such as tuna salads but also the best choice for BLTs and PB&Js.

This Italian bread is light with a more open texture inside. Its crust is typically thin and crisp. Neutral in flavor, ciabatta rolls come in a range of sizes and shapes to accommodate your needs.

Ciabattas are great for tender fillings such as deli meat and vegetables. It will also work as a unique bun for gourmet hamburgers.

This Italian bread is usually dense – made with lots of olive oil and without being leavened. Its strong flavor comes from all the best of the Mediterranean and among the common additions are olives, pesto or sun-dried tomatoes. Since the bread is often herbed, sweeter and cheesier fillings are a nice contrast.

Another classic sandwich bread with a soft, chewy crumb and crisp crust. Because of this hearty crust you should avoid fillings that are too soft like a really wet mayonnaise-based salad.

Baguettes are slightly sweet and is perfect for savory fillings like salami. In general, it works really well with rich and saucy meat, because the crumb of the bread soaks up the sauce without being ruined.

Rye bread will make your jaws work, and the compact and chewy texture also comes with a deep and herbaceous flavor. This is also the reason why you should pair it with strong-flavored fillings like spiced meats and pickled, smoked or cured fillings.

Made with a starter or levain, which is different from a yeast, sourdough has a chewy texture. Even though it has a slightly tangy taste, it should never be too sour. Sandwiches made on sourdough can enhance hearty, earthy and meaty fillings, and it complements sweeter ingredients too.

Make sourdough sandwiches with fillings like grilled chicken, caramelized onions and mayo or thick slices of mozzarella, tomatoes and balsamic glaze – it’s a match made in heaven!

Be inspired by trends and mainstream

A classic sandwich becomes a classic for a reason: It has a broad appeal and hence becomes a crowd-pleaser. Don’t avoid the classics just because you want to be original. They all have something good to offer.

Instead take a look at what sort of ingredients are considered mainstream and what are trending – and experiment your way to the perfect match and new classics.

Here are some of the most common sandwich elements and emerging trends: 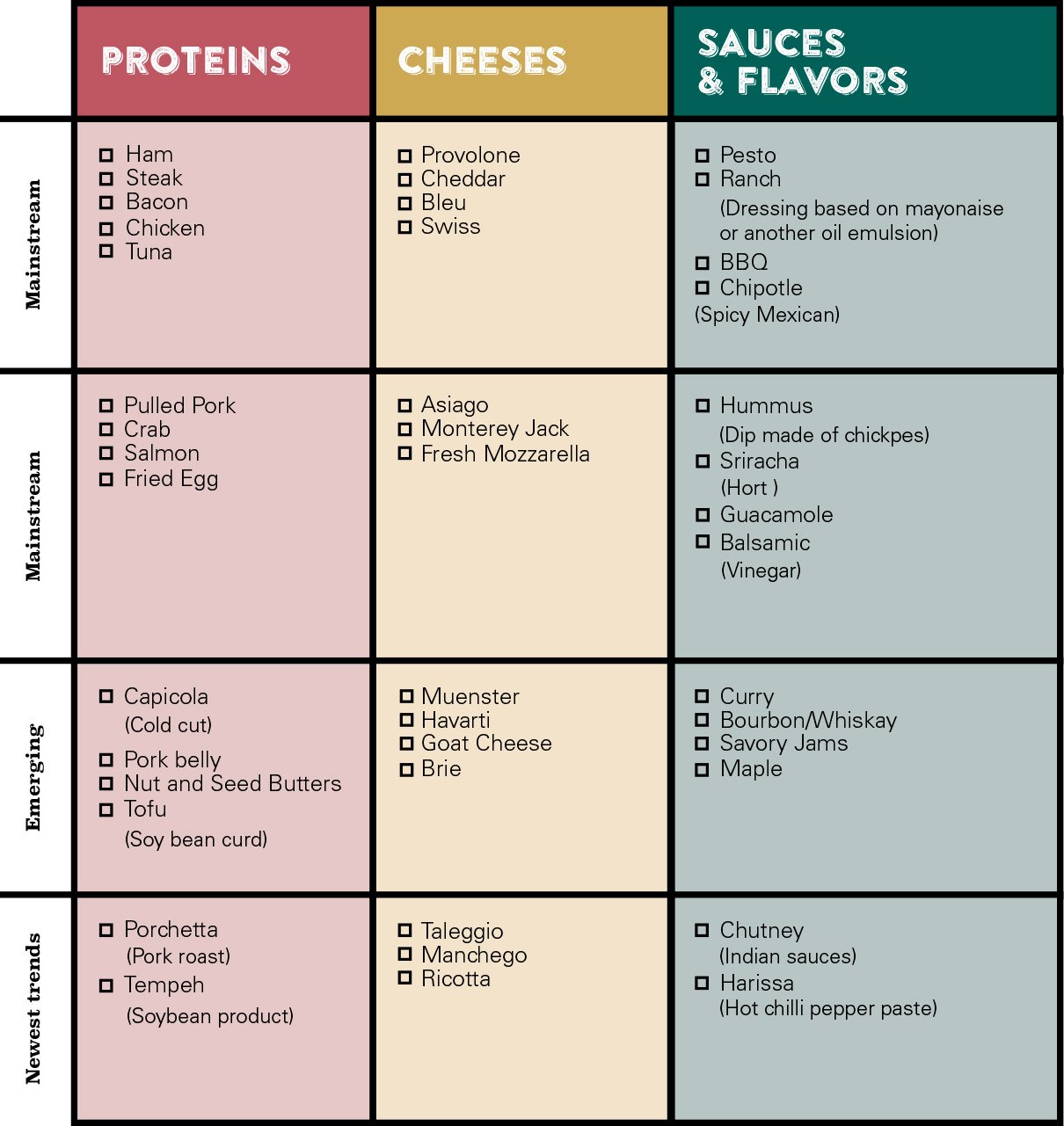 The right product for the right time

When consumers are ready to pay a little extra?